The main aim of this page is to provide a general introduction to the robot interfaces, which form vital element of Photoneo Bin Picking Studio.

It is highly recommended that users read this tutorial prior to installation of specific robot interface !!!

The Photoneo Bin Picking Studio is compatible with a wide range of industrial manipulators produced by different robotic manufacturers. For example, if you order Photoneo Bin Picking Studio for your ABB robot, in addition to the pre-configured Vision Controller with bin picking application, you will also receive a Photoneo-ABB Interface as an .zip archive containing our Bin Picking Client and State Server implementation written in RAPID language. This code must be installed on your robot controller in order to enable proper communication between the bin picking application and the ABB IRC5 system. If you have a Fanuc robot, you will receive an interface written in Karel and TPE for Fanuc controllers; similarly a Melfa V interface is provided for Mitsubishi Robots, a Val3 interface for Staubli robots and so on. Installation procedures and configuration tutorials for particular brands are available in "Setting up guides" which is linked at the bottom of this page.

The plugin-based architecture of the Photoneo BP Studio enabling various robot client implementations is shown in the figure below: 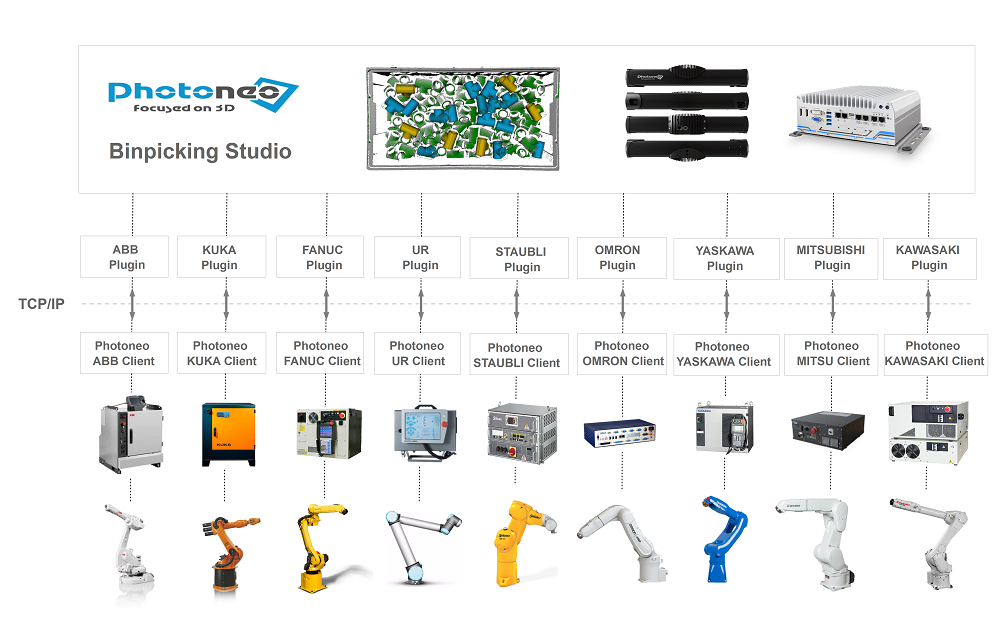 As was mentioned above, the Photoneo Bin Picking Studio is compatible with a wide range of industrial manipulators produced by different manufacturers. The implementation and installation processes differ for each individual robot model, but five general principles apply to all of them:

The Robot Interface for Photoneo BP Studio always consists of two tasks - State Server + Bin Picking Client. Both processes must run in parallel on the target robot controller. State Server, reporting the current joint and tool pose coordinates, usually runs in the background, while BP Client, which is responsible for the Request/Response transfers between Vision Controller and the robot controller, is controlled directly by the robot Programmer/Operator using Photoneo Robotic API.

TCP/IP is utilized for communication between Photoneo Vision Controller and the specific robot controller. In most cases an additional industrial fieldbus can be configured for basic robot control (ON/OFF, robot program selection, safety purposes etc.), however the option of replacing TCP/IP communication by means of any other industrial fieldbus is currently not supported.

Photoneo BP Client does not assume control of the robot! Photoneo BP Studio only feeds trajectory waypoints and appropriate gripper commands to the robot controller and it is always the robot Programmer/Operator who decides when to perform bin picking actions by calling particular jobs/routines/programs provided by Photoneo Robotic API. The robot programmer is also responsible for implementing gripper commands and setting appropriate motion speed.

In order to provide adequate feedback, Photoneo BP Client always enables the robot Programmer/Operator to track current robot program execution directly on the pendant. Motions are never executed by background tasks and out of the Programmer/Operator scope. Extreme caution is necessary especially during initial commissioning. Users must always make sure that motion speed is set appropriately and should be prepared to halt robot program execution immediately in case of untoward events.

Robot Interfaces for Photoneo BP Studio have been developed to be easily integrated into existing robotic applications written in standard robotic languages. From a robot programming point of view, the Photoneo BP Robot Interface is a set of jobs/routines/programs that are available for the robot Programmer/Operator to be called when bin picking is about to be executed.

For example when the next object needs to be picked, the robot Programmer/Operator calls a job/routine/program named requestTrajectory() or req_traj() or similar(depending on language syntax limits). The Robot interface transmits this request to the Vision Controller, which then performs the requested action (i.e. triggers a scan & compute motion plan) and the result (i.e. the set of trajectories and gripper commands) is transmitted back to the robot controller. The Robot Programmer/Operator is notified by a predefined register or flag that new motion data isachieved by realized by calling another job/routine/program usually named executeTrajectory() or similar.

The bin picking procedure is mostly comprised of four sub-trajectories (approach, grasp, de-approach and end) and two or three gripper commands. Each sub-trajectory consists of several waypoints (usually 10-100) defined in joint position representation, which the robot attempts to follow during the movement. Photoneo BP Client leverages a downloading approach (in contrast to a streaming one) meaning that each trajectory is downloaded from the Vision Controller and verified by the robot controller prior execution. No motion is executed until the robot controller has checked whether received waypoint matches the waypoint originally sent by the Vision Controller.

Robot interfaces for the Photoneo BP system were developed using the latest available hardware. By default the system was designed for use with 6-axis industrial manipulators of various scales but recently we have been also been experimenting with collaborative robots such as KUKA IIWA or ABB YUMI which should also be supported in upcoming releases.

The following list summarizes the systems which are currently supported and the specific software options required for multitasking and user socket messaging functionality:

Where to go next

Our Setting up tutorials provide detailed instructions on how to configure specific robot controllers and to install the required Photoneo Robot Interface sources: