NOTE: Users are strongly recommended to read the general introduction to robot interfaces prior to installing specific robot modules.

In order to check if Ethernet KRL is available on the robot controller, switch to Expert Mode and browse to Menu -> Startup -> Additional Software: 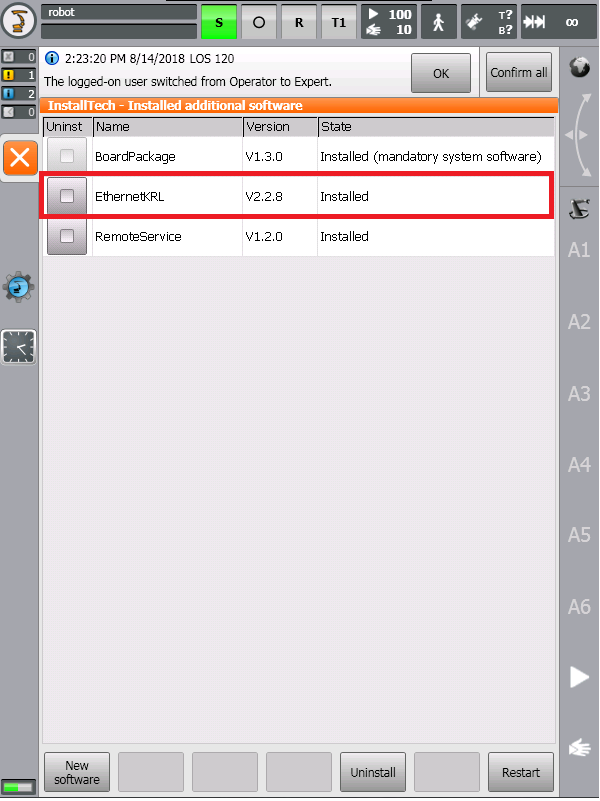 The following tutorial gives a step by step guide of how to configure your KUKA KRC4 controller and install all the necessary files you will need to get the robot interface for Photoneo Binpicking Studio up and running.

As a first step in commissioning, ensure that the IP address of the KRC4 controller meets your network configuration requirements 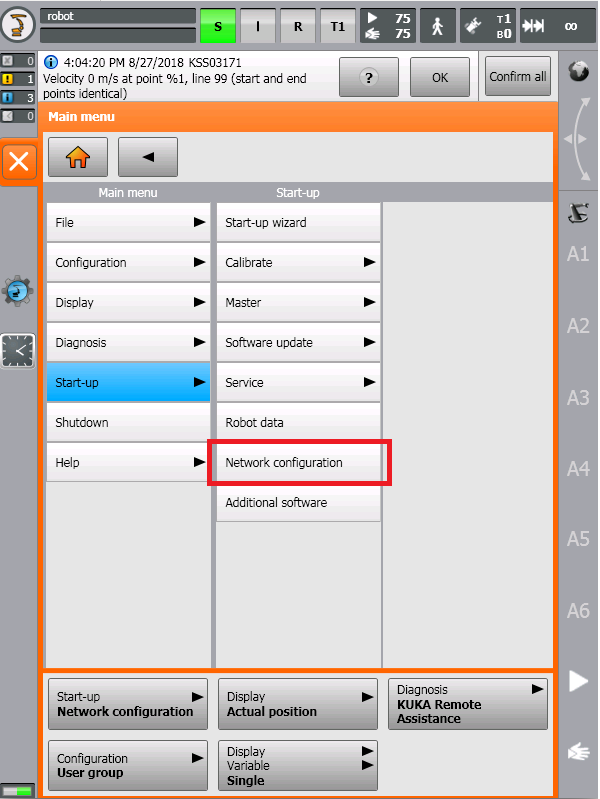 Amend the network configuration to meet your requirements: 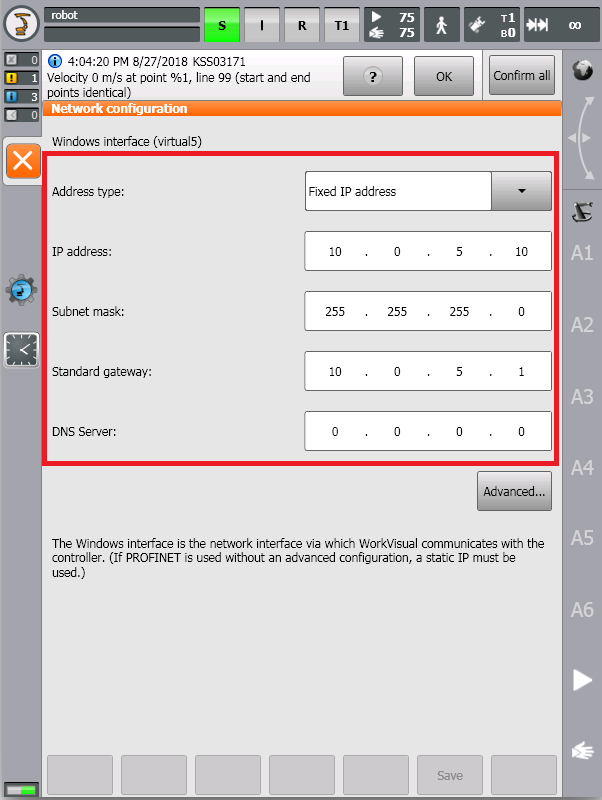 KRC4 Control PC needs to be rebooted in order to apply the new network configuration. 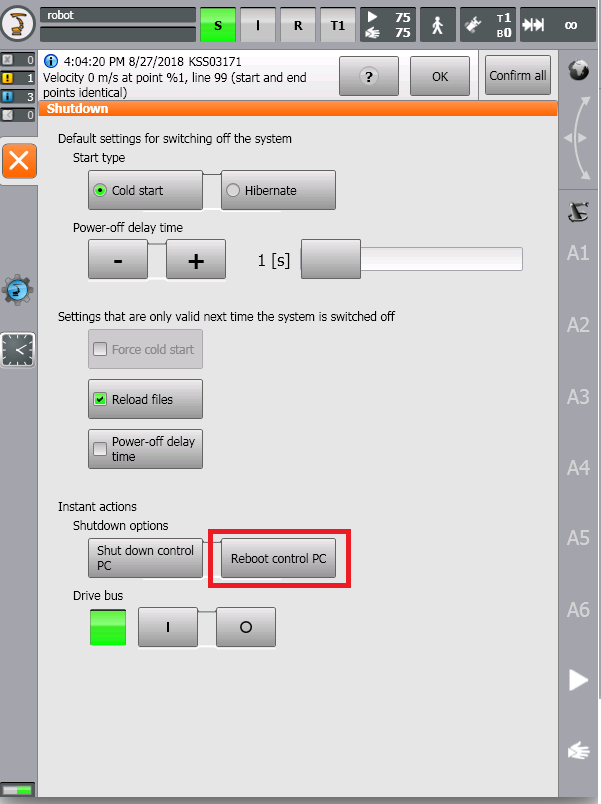 The Photoneo KUKA Module consists of the following files:

Copy these files from the USB stick to C:\KRC\Roboter\Config\User\Common\EthernetKRL\ as is shown in the figure below: 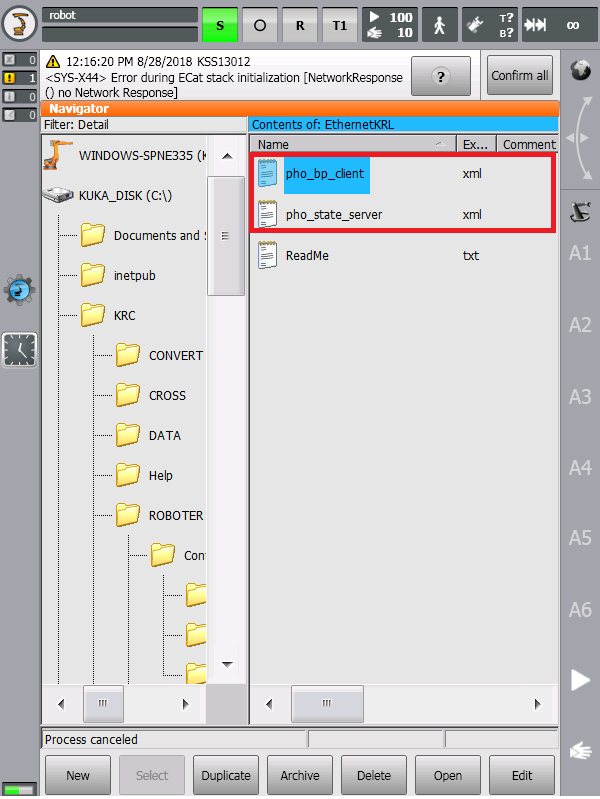 XML files contain the configuration of EKI communication interface. The only entries that need to be changed are the IP address tags.

Enter the IP address of the Vision Controller to External IP tag in pho_bp_client.xml as is shown in the figure below:

NOTE: Default Bin Picking Client Port Configuration is 54601 - do not edit this tag unless approved by Photoneo Support !!! 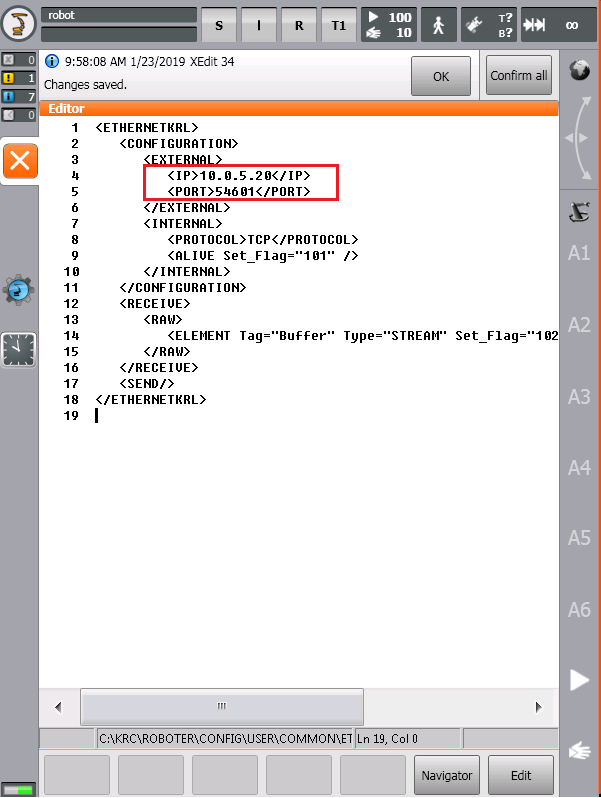 Enter the IP address of the KUKA Robot Controller to Internal IP tag in pho_state_server.xml as is shown in the figure below:

NOTE: Default State Server Port Configuration is 54602 - do not edit this tag unless approved by Photoneo Support !!! 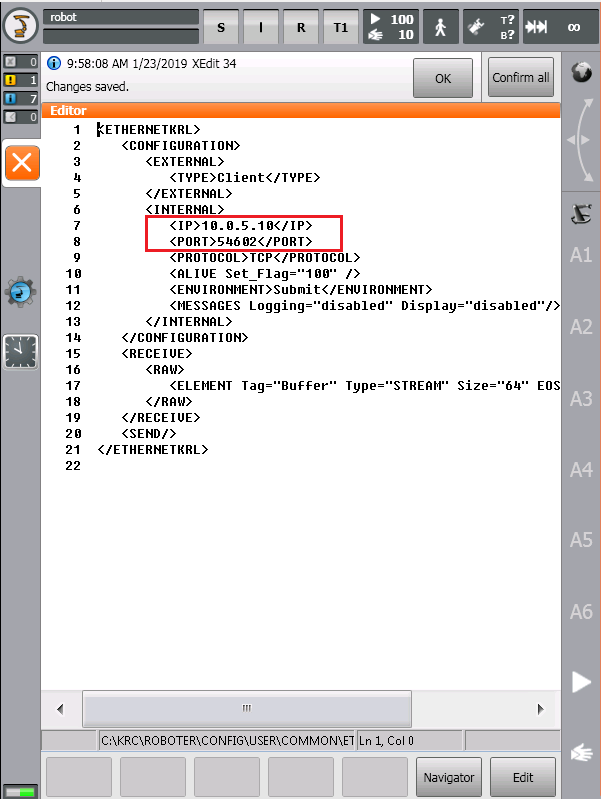 Save the changes and reboot the control PC again to apply the new EthernetKRL interface configuration.

NOTE: Do NOT use these flags and ports in the rest of your application!!!

The Photoneo folder contains internal files that should not be edited by the user.

Copy the entire content of Photoneo folder from the USB Stick to the R1/Photoneo// (Compilation errors can be ignored for now - just copy the files): 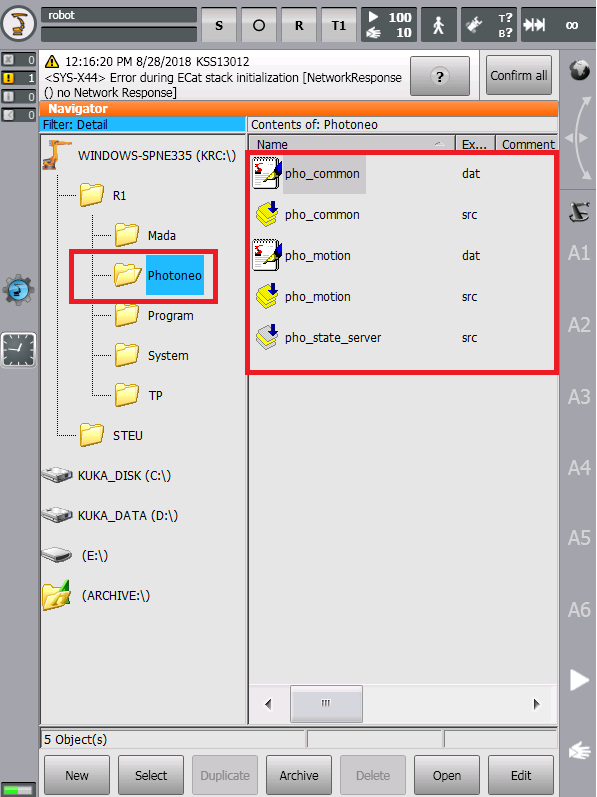 It is highly recommended to hide the Photoneo folder from the Operator's reach.

Switch to Expert Mode, and set the System flag in the Properties of the Photoneo folder: 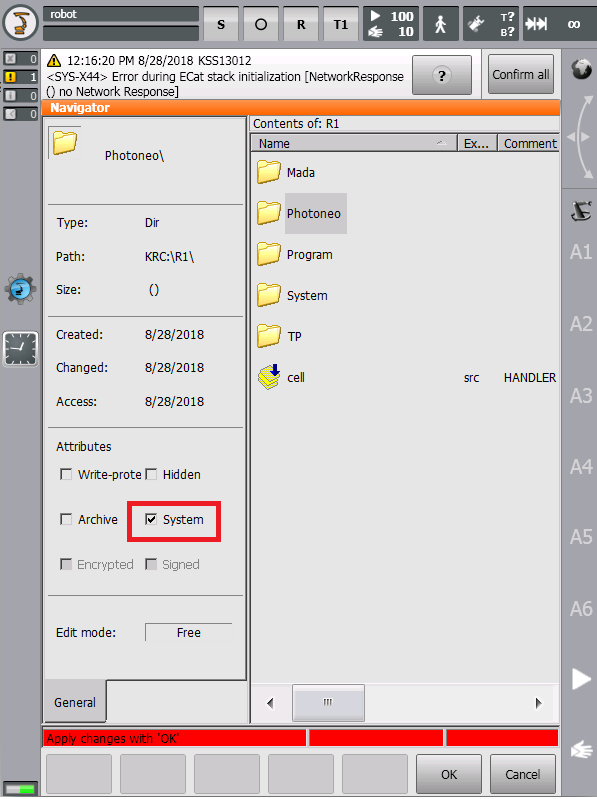 The program folder contains files which should be amended by the user in order to meet application requirements.

Do not replace the whole program folder, only copy three files from the Photono_KUKA_Module archive to R1/Program Folder: 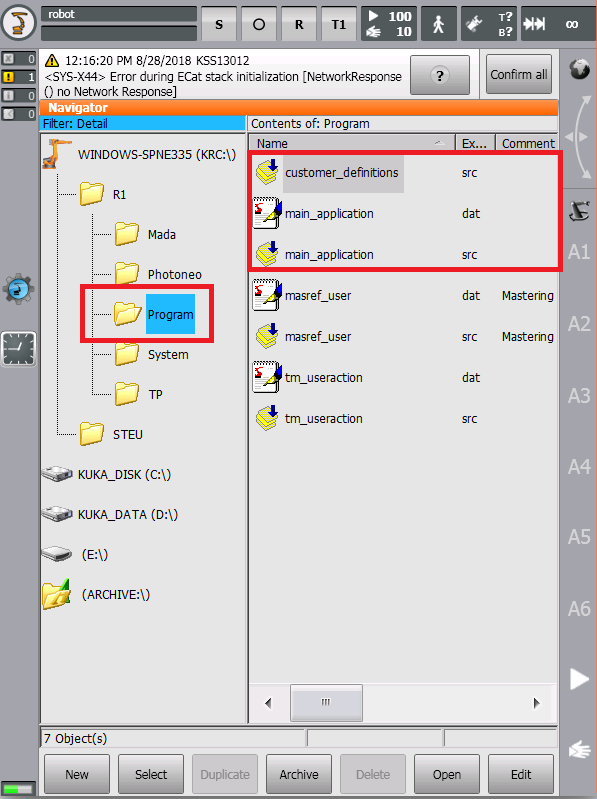 NOTE: Compilation errors should disappear after copying all files to the robot controller.

In order to get State Server up and running, it is necessary to edit the Submit Interpreter program sps.sub in R1/System.

Switch to Expert Mode and deselect the Submit Interpreter program before making any changes: 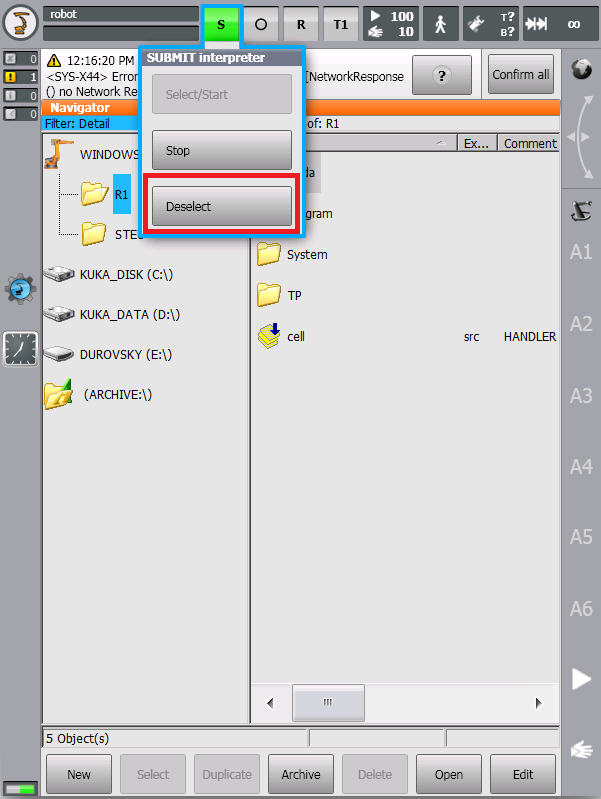 As is shown in the figure below, add the following two lines of code to the original sps.sub file. 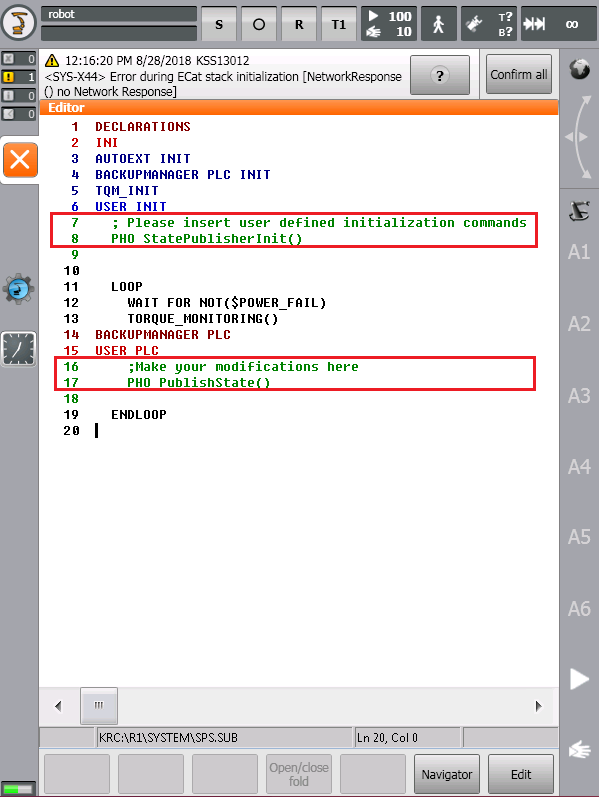 State Server is necessary for calibration and visualization purposes. As soon as you restart Submit Interpreter, it should be up and waiting for the connection from the Bin Picking Studio.

Ensure that TOOL and BASE are selected before starting calibration process. If TOOL and BASE are not selected - (T? and B?) as shown in the figure below, state server will not be able to report correct TCP to the Bin Picking Studio. 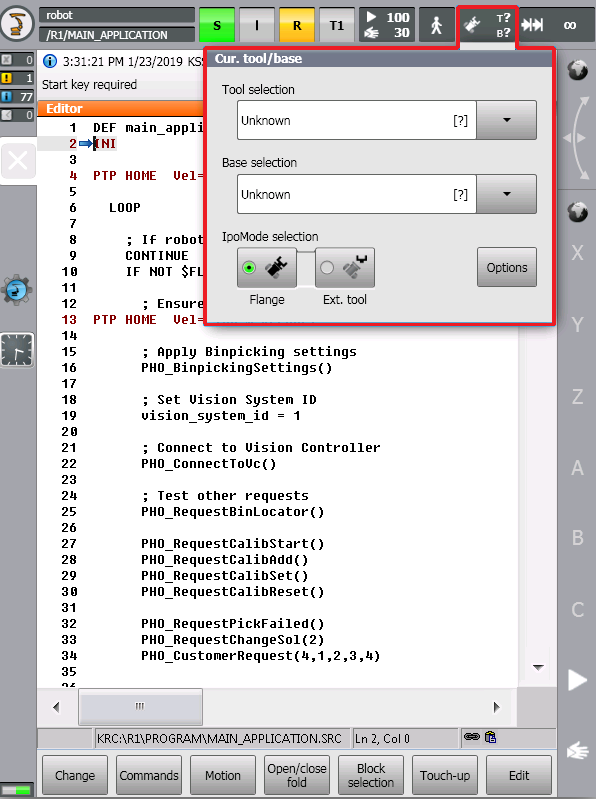 Select $NULLFRAME for both TOOL and BASE frames in order to enable proper functionality of State Server. 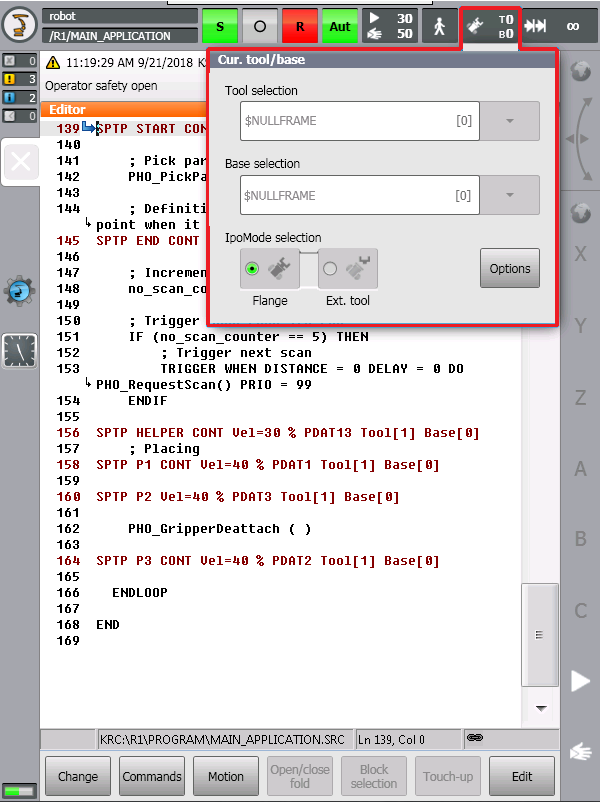 Users are expected to reteach home, start, end & placing positions before selecting this file for launch. 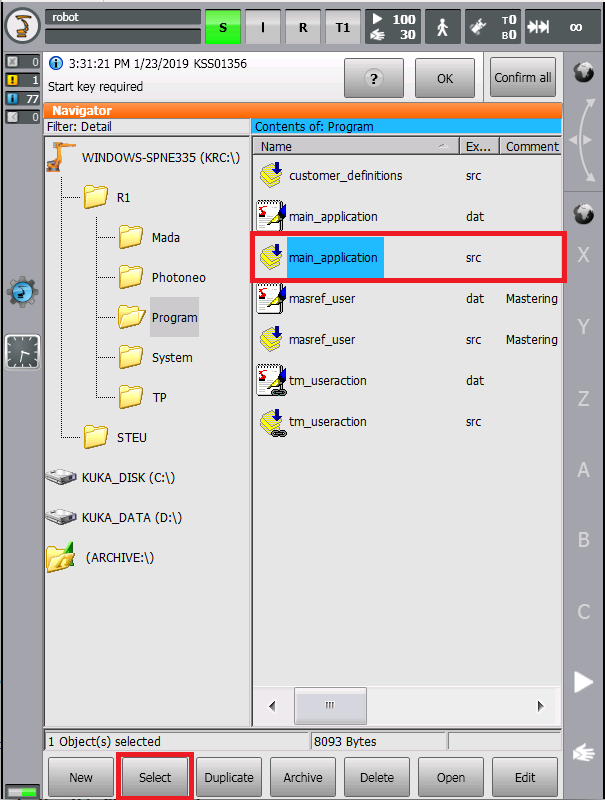 Select the program line containing pose which you are about to reteach, HOME is shown in this example:

Press Block Selection button to move program pointer to the current line. Jog robot to the new pose and select Touch Up Button to reteach position: 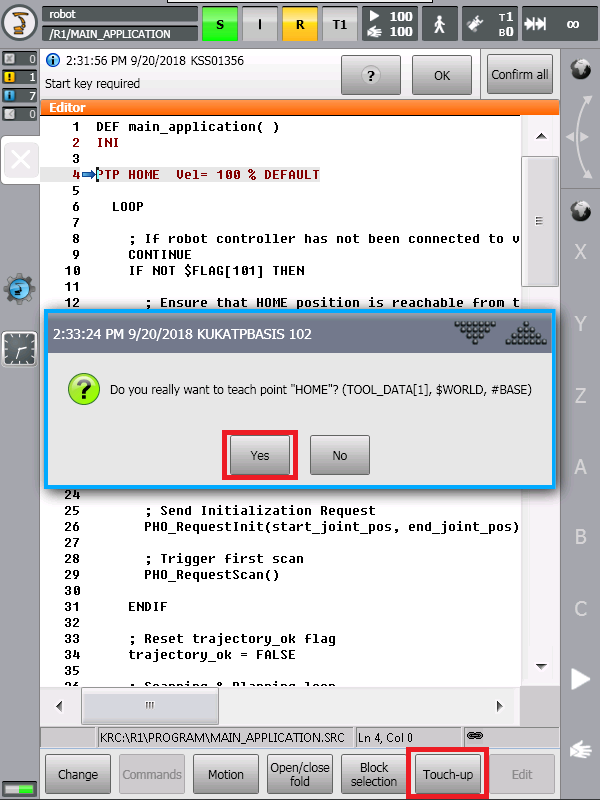 START and END poses are defined in the program picking section (Not at the beginning of the program as usual at other vendors).

NOTE: Ensure that HOME pose is reachable from last placing pose (P3 in the basic template) without collision. The robot might move to HOME pose directly when an error occurs!!!

As was mentioned above, the Bin Picking Client occupies $FLAG[101] & FLAG[102] and utilizes Port 54602 to connect to the bin picking server running on the Bin Picking Studio.

NOTE: When PLC is used as a high-level controller, the code from main_applications.src can be divided into separate programs and launched directly from cell.src.

Photoneo KUKA interface was designed to be easily integrated into existing applications written in KRL code. KRL API and KRL Config should be used to adapt default bin picking template to the requirements of specific applications.

The following API describes the functionality of requests provided by the Photoneo KUKA Interface. These requests are intended for high-level control of bin picking sequences and are usually called in main_application.src

PHO_ConnectToVC() - function to establish a connection to the Bin Picking Studio. Blocking function; suspends the program until a proper connection is established.

PHO_RequestScan() - request to trigger the next scan and localization. Non-blocking request; the KRL program continues immediately at the next line.

PHO_WaitForScan() - function to wait for scan to be finished. This should be called after triggering the scan, but not immediately. Blocking request; the KRL program waits for the response from Bin Picking Studio.

PHO_RequestTrajectory() - request to start trajectory planning for current goal. Non-blocking function; the KRL program continues immediately at the next line.

PHO_PickObject() - request to execute bin picking operation and execute motion. Always make sure that the robot is in Start pose before invoking this function.

PHO_RequestCalibAdd() - request to add calibration point - a scan is triggered and the calibration is recalculated. (Not supported in this version)

NOTE #1: The PHO_ConnectToVC function should always be called as a first of Photoneo Bin Picking API procedures. It should always be followed by PHO_RequestInit function. Not obeying these order will result in a communication error.

Photoneo KUKA interface provides basic error handling. If an error occurs during bin picking operations, the error_code global_variable contains the code of the specific error which will helps to identify the source of the problem.

PHO_LONG_TRAJ := 6 - The length of one of the trajectory segments was higher than the maximum allowed trajectory size (usually max = 100 waypoints)

PHO_NOT_INITIALIZED := 203 - Bin picking application has not been properly initialized on Bin Picking Studio side.

PHO_PART_LOST := 204 - Part has been lost during motion execution

The following section provides the source code of main_application.src - the basic template which demonstrates how the user's application and Photoneo Bin Picking API can be integrated together.

Make sure that your solution on the Deployment page of Bin Picking Studio is running and Binpicking Status is in Waiting for a connection state as is shown in the figure below: 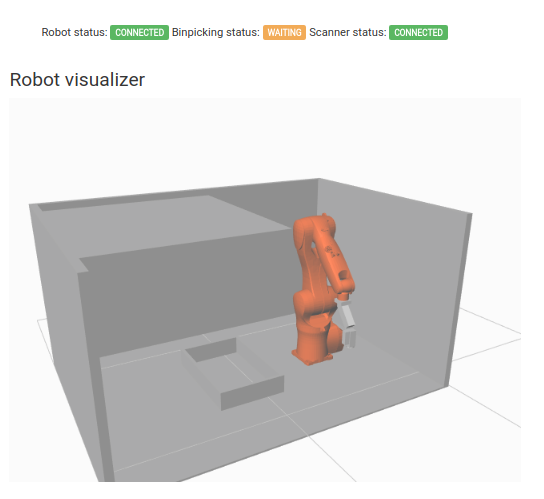 Choose if you want to run the application in T1, T2 or AUT mode and adopt the speed override if required 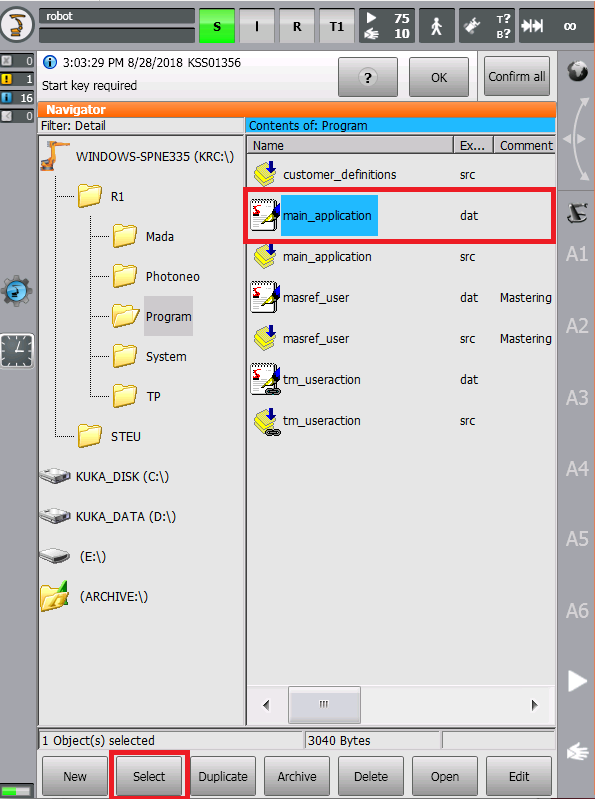 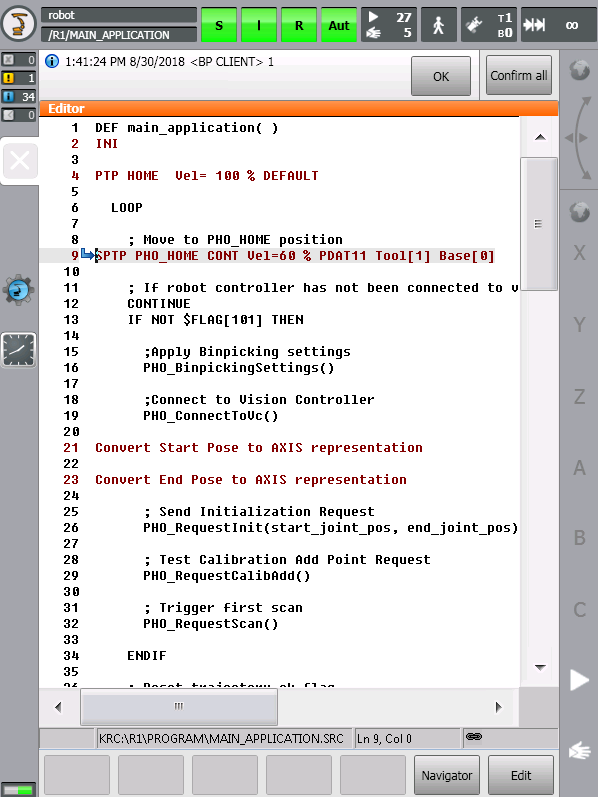 You should also notice that Binpicking Status has changed to the Connected state. This means that the Bin Picking Studio has established a successful connection to the robot controller: 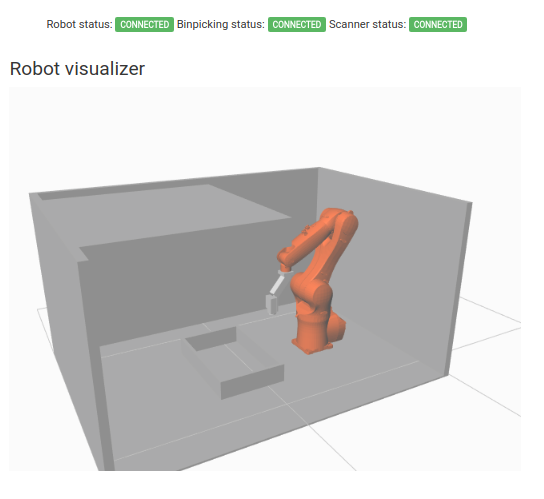 NOTE: Ensure that you are ready to halt motion execution immediately in case of any problem. It is strongly recommended to reduce the speed to 10% of maximum or less during initial bin picking tests.

Since KUKA UI does not provide a standard "Terminal" utility, users are recommended to use Display tool to monitor values of specific bin picking related variables. 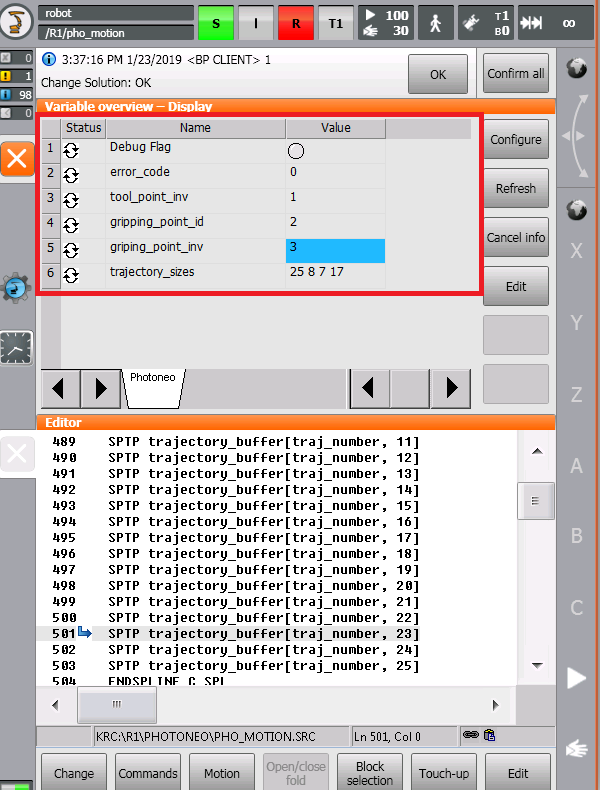